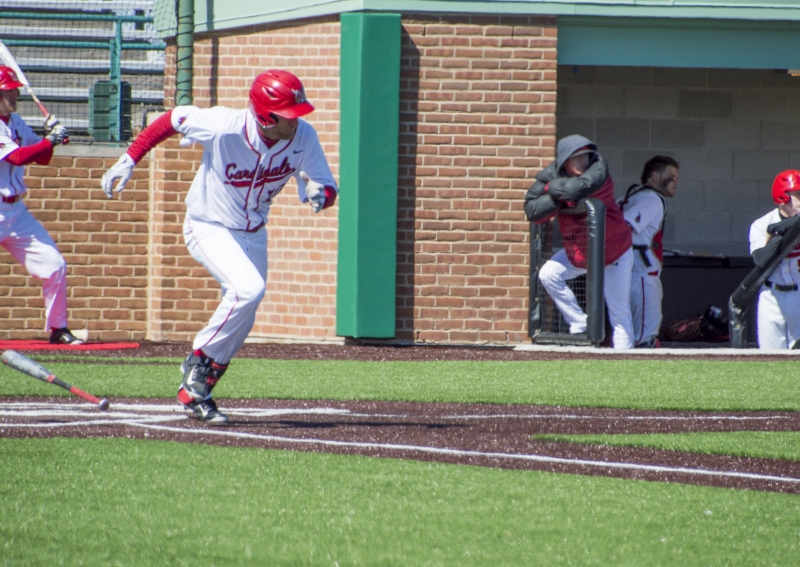 Sophomore infielder Sean Kennedy runs to first base after hitting the ball during the first game of the double header against Buffalo on March 28 at First Merchants Ballpark Complex. DN PHOTO ALAINA JAYE HALSEY

The Cardinals improved to 24-12 and 9-4 in Mid-American Conference play.

Sophomore Zach Plesac led Ball State on the mound, earning the complete-game victory and improving to 3-2 on the season. He allowed 10 hits and two earned runs while striking out four.

Plesac received some early run support, as senior Elbert Devarie got the scoring started with an RBI single.

After an RBI groundout from sophomore Sean Kennedy, Devarie scored on a wild pitch to make the score 3-0.

The Cardinals extended their lead in the fourth with two more runs.

Devarie was 3-4 at the plate to lead the offense. Call, Kennedy and Eppers added two hits apiece.

Eastern Michigan got on the board with a run in the eighth and ninth innings, but it wasn't enough.

Ball State outhit its opponent for the first time in three games, finishing with a 12-10 advantage.

Ball State and Eastern Michigan will return to the field at 2 p.m. on April 18 in Ypsilanti, Mich.