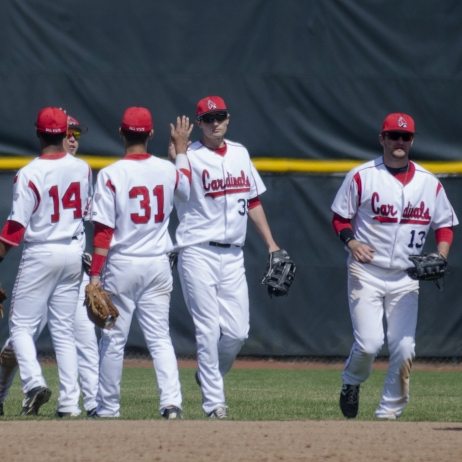 Starting pitcher Trevor Henderson allowed two hits and one earned run in 5.2 innings, and the Ball State baseball team extended its win streak to nine with an 8-2 victory over Purdue on March 25 in Muncie.

The Cardinals improved to 16-7 on the season with their third win over a Big Ten team.

Henderson got off to a fast start, striking out the game's first batter. He held Purdue scoreless in the top of the first with some solid defense behind him.

In the bottom of the inning, junior Ryan Spaulding got the scoring started with a solo home run over the center-field wall. After a single from senior Elbert Devarie, the Cardinals loaded the bases but failed to score again.

Purdue put runners on first and second in the second inning, but Henderson kept them off the scoreboard with two straight outs at first base.

Sophomore Matt Eppers hit the first home run of his career — a two-run shot — in the second inning to make the score 3-0.

Purdue got on the board in the third with a solo home run from Michael Vilardo. After the homer, Ball State got off the field, retiring the next three batters.

“The wind was blowing out today, so I made sure to keep it low on all my pitches and just that one hit I left it up a little bit high," Henderson said. “It makes me feel safe to give the batters better pitches. In high school, I had to tip-toe around, but here, I don’t have to do that, so it definitely makes my job easier."

After another solid inning on defense, sophomore Alex Maloney singled to score Eppers and extend the Ball State lead to 6-1.

The Cardinals made a pitching change in the top of the sixth; sophomore David Current came in with two outs and one runner on base.

Current allowed two walks, but struck out the next Purdue batter with the bases loaded to end the inning and keep the Boilermakers off the board.

“Our relief pitchers have been put in some tough situations," head coach Rich Maloney said. "Current has been put into two or three bases-loaded situations where he’s had to deliver, and he’s done it. So I have been really pleased in that regard to how they have performed."

After Ball State put up two runs in the bottom of the sixth, Current was replaced by fifth-year senior Devin Wilburn in the seventh, where Purdue picked up a run. Wilburn pitched 1.1 innings before freshman Colin Brockhouse threw the final inning to seal the 8-2 victory.

The Cardinals will return to Mid-American Conference play with a three-game series against Buffalo beginning on March 27.