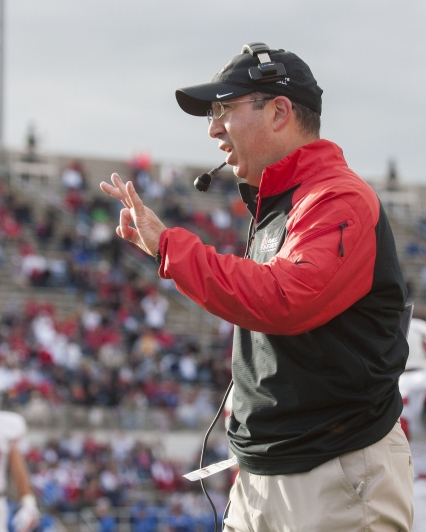 Head coach Pete Lembo talks to the refs during the game against Indiana State on Sept. 13 at Scheumann Stadium

National Signing Day officially marked the addition of 24 players to the Ball State football team for the upcoming 2015 season.

The Cardinals have added eight three-star recruits and one two-star recruit for next season, according to ESPN.com.

Three-star defensive back Armani McNulty chose Ball State over Central Michigan, and said he is ready for his class to contribute immediately.

Ball State addressed needs on both sides of the football, adding several offensive and defensive players, as well as one special teams player.

Kicker Morgan Hagee from Plainfield and running back James Gilbert of Indianapolis graduated from their respective high schools in December 2014, and began taking classes at Ball State this semester.

Nine total players from Indiana will make their way to Muncie this fall. This list includes the lone quarterback in the Cardinals' recruiting class, Yorktown native Riley Neal.

Ball State is coming off of a 5-7 campaign and will look to benefit from its recruiting class when it opens the 2015 season in September.

“We really enjoyed getting to know these new student-athletes and their families over the course of this recruiting cycle,” head coach Pete Lembo said in a statement. “We have got some terrific young men coming on board that will be great additions to the football program and the university community."