Ball State baseball ranked No. 31 in nation to begin 2015 season

After finishing 22-4 in conference play last season, the Ball State baseball team enters 2015 as the preseason favorite in the Mid-American Conference West Division.

Head coach Rich Maloney knows, however, repeating as division champions, winning the MAC tournament and qualifying for the NCAA Tournament won’t be easy.

“We’re not going to come up and surprise anybody now,” Maloney said. “We’re going to get the best of whatever team [we’re playing] has. … That can do one of two things: either make you better, or put you back down.”

Ball State opens the season ranked No. 31 in the nation, according to the Collegiate Baseball preseason rankings, and faces a team in Kentucky that, last season, handed Maloney “the two most embarrassing losses” of his 19-year head coaching career.

“They crushed us,” Maloney, said. “We haven’t forgotten that.”

In three games in Lexington, Ky., the Wildcats outscored the Cardinals 58-14. Fifty of Kentucky’s runs came in the series’s final two games, after Ball State won the opener 10-8 in extra innings.

The one-game series is part of the Buffalo Wild Wings Battle at the Beach at Wilmington, N.C. In addition to its season opener Feb. 13 at noon against Kentucky, Ball State faces host-school UNC-Wilmington and Richmond while in North Carolina.

As inclement weather remains a factor in many areas of the country, Ball State doesn’t play at home until March 10, against Miami (Ohio). When the Cardinals return home, however, a renovated park awaits, as Ball Diamond is one of six facilities to receive renovations following the university's $20 million Cardinal Commitment fundraising campaign.

After posting a record of 70-42 over the previous two seasons, Maloney considers the upgrades well-deserved.

The improvements to Ball Diamond not only give Ball State a home field more on par with programs around the country, but also an advantage in scheduling.

After not hosting a single opponent from a power conference last year, the Cardinals host three teams from the Big Ten – Rutgers, Purdue and Indiana – this season.

Maloney said starting pitchers sophomore Zach Plesac and senior Scott Baker need to perform at a consistent rate throughout the entire year if Ball State is going to succeed against an increase in competition. 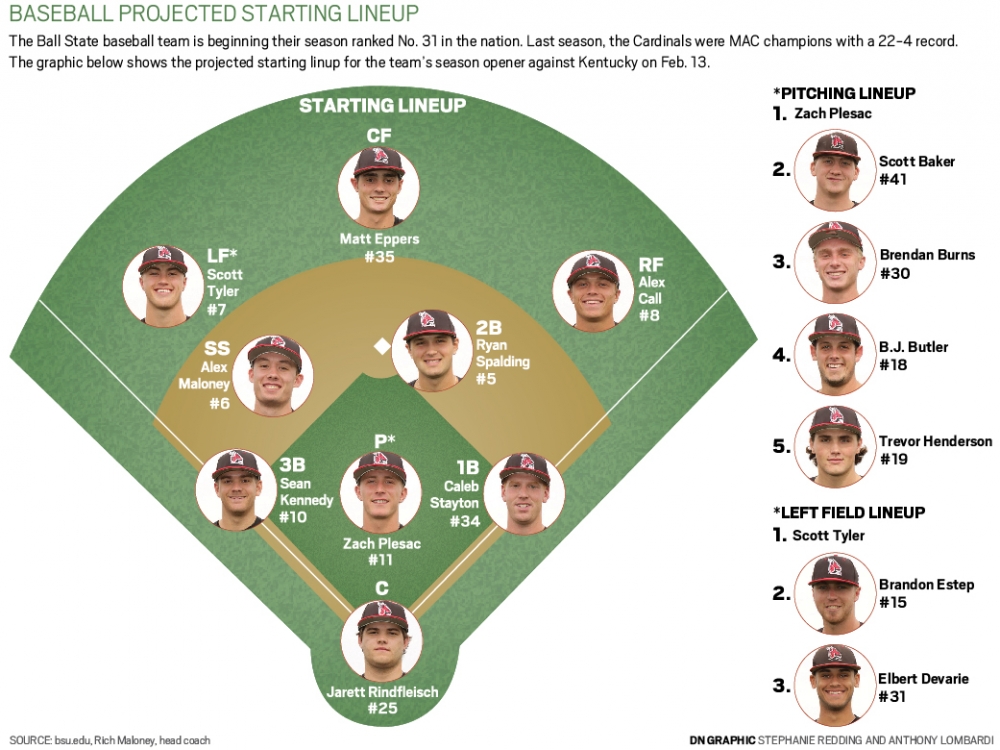 Plesac earned the 2014 Collegiate Baseball National Freshman Pitcher of the Year in his first year with the program, and he projects as the Cardinals’ ace with the departure of T.J. Weir. As a freshman, Plesac went 12-2, posting a 2.11 earned run average, while striking out 67 hitters in 85.1 innings pitched.

The Cardinals return six starters from last season’s roster, despite the loss of outfielder Sean Godfrey, who earned a spot on the 2014 Louisville Slugger Collegiate Baseball All-America Third Team before being drafted by the Atlanta Braves in the 22nd round of the MLB Draft.

Maloney feels there isn’t one specific player he’s looking at to reproduce Godfrey’s 2014 campaign, but said the lineup as a whole needs to take the next step if the Cardinals are going to reach their objectives.

“If you want to be the best, you got to play against the best,” he said. “You got to prove you can beat them. It’s one thing to talk about it, … but the reality is you got to win. If you win, you get recognized.”

By Staff Reports / 17 hours ago

Cardinal Street Fest has been announced for Noon-5 p.m. August 19. There is scheduled to be games, food, music and much more.