Aggressiveness in the paint leads to 5 straight wins 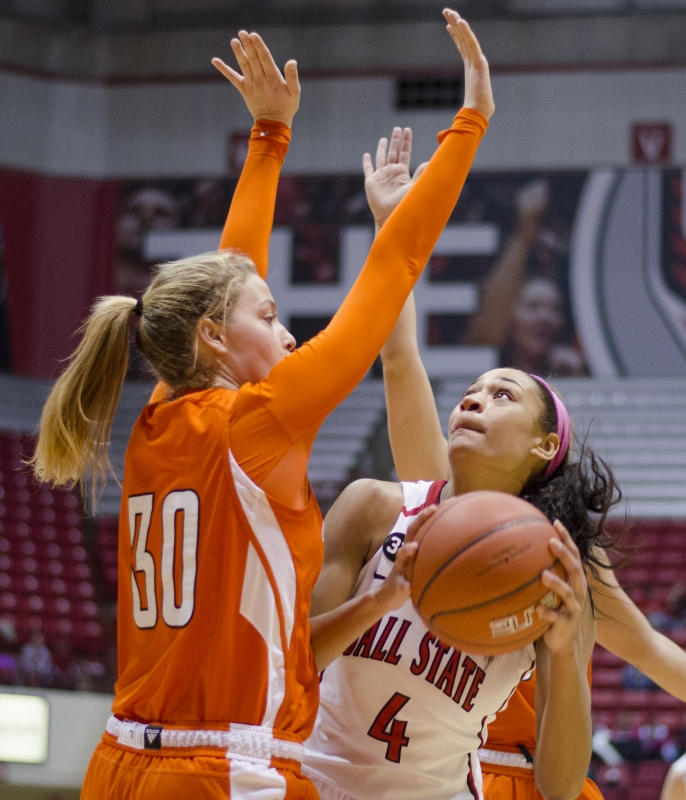 Junior forward Nathalie Fontaine looks to get a shot during the game against Bowling Green on Feb. 14 at Worthen Arena. DN PHOTO BREANNA DAUGHERTY

An emphasis inside the paint has led the Ball State women's basketball team to five straight wins and an 11-3 record in the Mid-American Conference overall.

"The defenses have given us opportunities in the paint and we have been taking advantage of it by being more aggressive," head coach Brady Sallee said.

A few players have benefitted from this new aggressive style.

Junior Nathalie Fontaine has scored an average of 12 points from inside the paint during the five-game streak. Sophomore Renee Bennett has averaged six points from the paint and has seen her season scoring average rise from 5.9 to 7 points per game.

In addition to increased scoring, the team's rebounding margin, especially on the offensive end, has improved.

During its winning streak, Ball State is averaging 37 rebounds per game and has out-rebounded its opponent in four of those victories.

"When I look at a game, one of the first things I look at is rebounding," Sallee said. "It's something we have worked on all season because of how important it is for us to win."

Prior to this recent string of victories, the Cardinals had only out-rebounded their opponents in four of the previous 20 games.

Ball State's efforts have put them on top of the MAC West Division and one game behind Ohio for the league's top record overall.

Its current seed would give the team a bye through the MAC Tournament's first three rounds.

May 16, Ball State University announced its hours of operation for dining this summer.

By Brevin Williams / 18 hours ago

May 14, at the Delaware County Building, people gathered and rallied for a "Bans Off Our Bodies" women's march concerning the ongoing Roe v. Wade trial.

The David Owsley Museum of Art played host to the annual Art in Bloom event May 14-15.