FOOTBALL: A look at key games that led to Ball State's 5-7 finish this season

Ball State started its season off with a win against FCS opponent Colgate. Running backs Jahwan Edwards and Horactio Banks torched the Colgate defense for a combined 311 yards. New quarterback Ozzie Mann made his debut, replacing Keith Wenning. Mann played the role of game manager, but threw a 34-yard touchdown to KeVonn Mabon late in the first quarter, then hit Aaron Hepp for another in the second quarter. Scott Secor added three field goals as Ball State cruised to a comfortable victory.

Memorable quote: “It felt good. It felt like [Mann] was in control of the offense,” Lembo said. “It felt like we were operating how Ball State operates.” 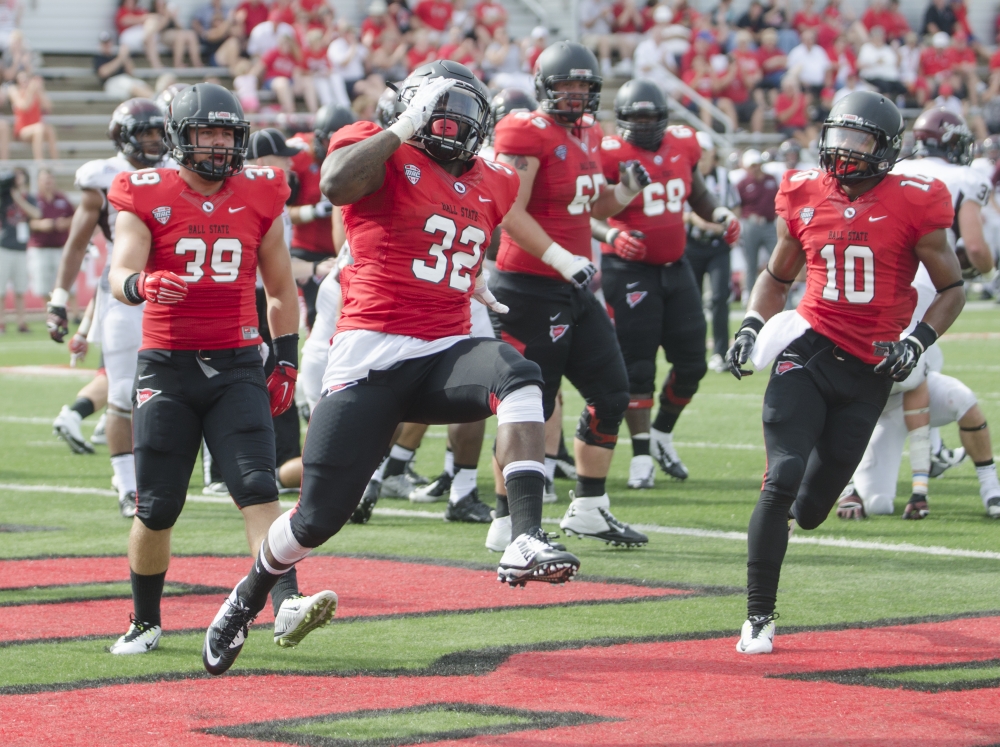 Senior running back Jahwan Edwards celebrates after getting a touchdown during the game against Colgate on Aug. 30 at Scheumann Stadium. DN PHOTO BREANNA DAUGHERTY

With the teams scoreless, Iowa’s offense had a bad handoff and it was picked up by Ball State’s Blake Dueitt, returned 35 yards for the touchdown. Iowa missed three field goals, keeping Ball State in the lead throughout most of the game. With the Cardinals leading 13-3 and less than three minutes left in the fourth quarter, Hawkeyes quarterback Jake Rudock threw two touchdowns to stun the Cardinals. Mann lost a fumble on Ball State’s final drive, ending Ball State’s hopes for an upset win.

Memorable quote: “There were times at Ball State where this would have been a moral victory,” Lembo said. “That’s not going to happen. We’ve got to find a way to win these games.” 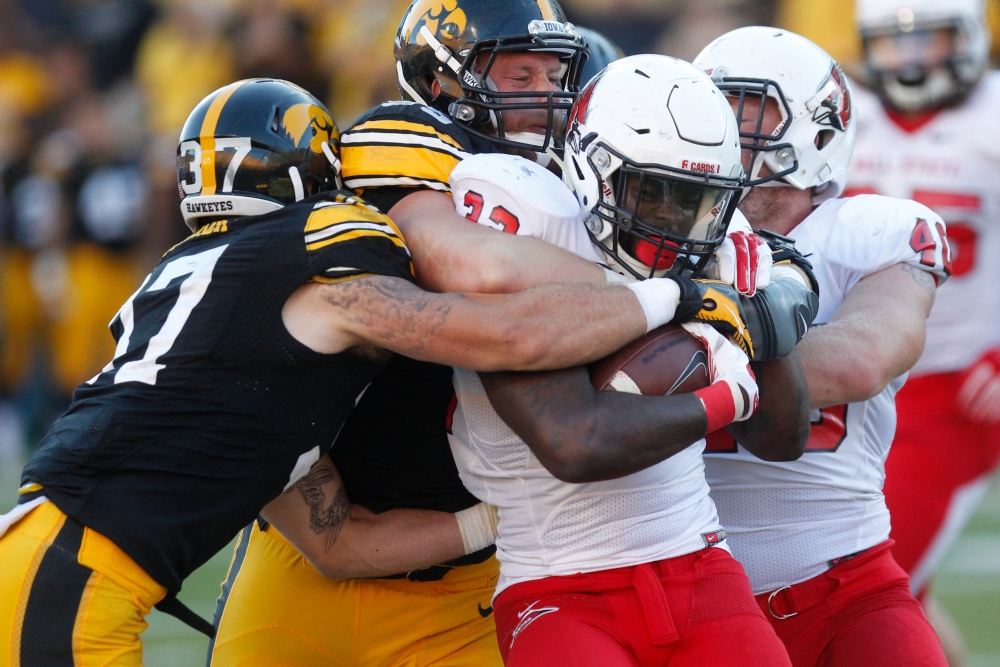 After a few weeks of subpar defense, Ball State’s rush defense collapsed, allowing 425 yards on the ground. It also marked the end of quarterback Ozzie Mann’s five straight starts. He threw for just 173 yards, one touchdown and an interception in the loss, continuing a streak of poor play that was handicapping the offense. After the loss and during the upcoming bye week, Ball State’s coaching staff used the time to look at all of its options, eventually moving to Jack Milas.

Memorable quote: “It’s going to be on me, on the other captains to talk to each other and see what we can do to get better,” senior linebacker Ben Ingle said. “Right now, whatever we’re doing isn’t clicking.” 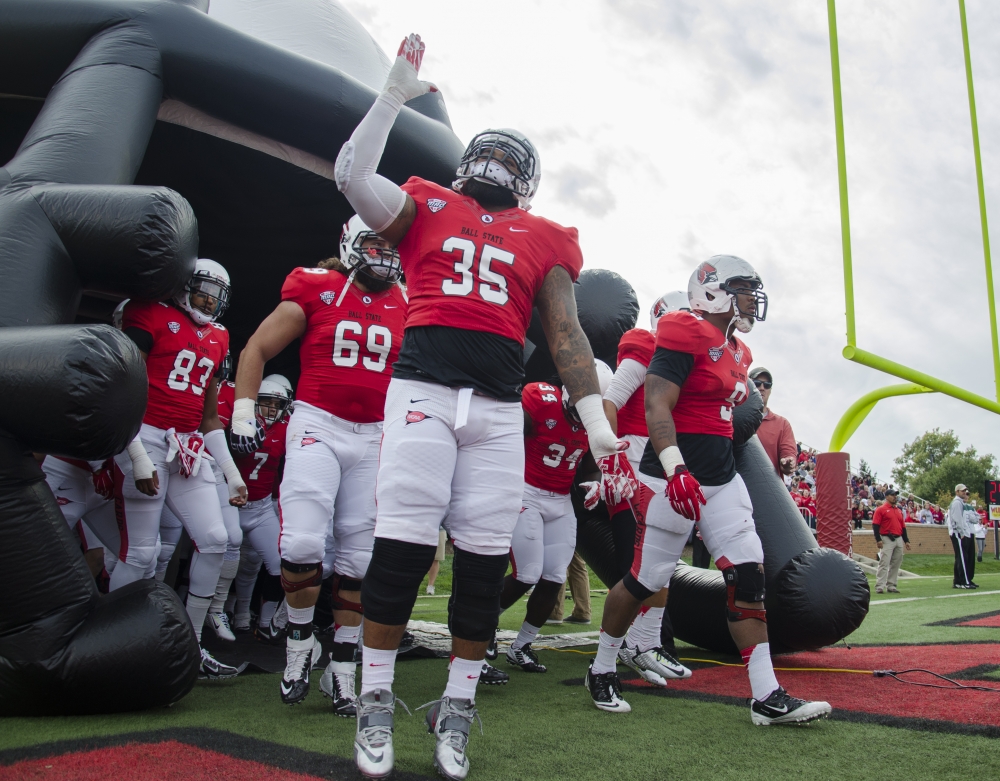 The Ball State football team runs out onto the field before the game against Western Michigan on Oct. 11 at Scheumann Stadium. DN PHOTO BREANNA DAUGHERTY

Milas got his first start of the season for Ball State, throwing four touchdowns and not turning the ball over in his first collegiate appearance. The Cardinals went into halftime holding a 31-14 lead, but the Broncos stormed back, eventually winning on a 12-yard touchdown pass with just 1:25 left in the fourth quarter. Despite the loss, Milas’s impressive performance gave Ball State hope that it had found its quarterback of the future.

Memorable quote: “We threw the ball better today than we have all year,” Lembo said. “[Milas] did a really nice job.” 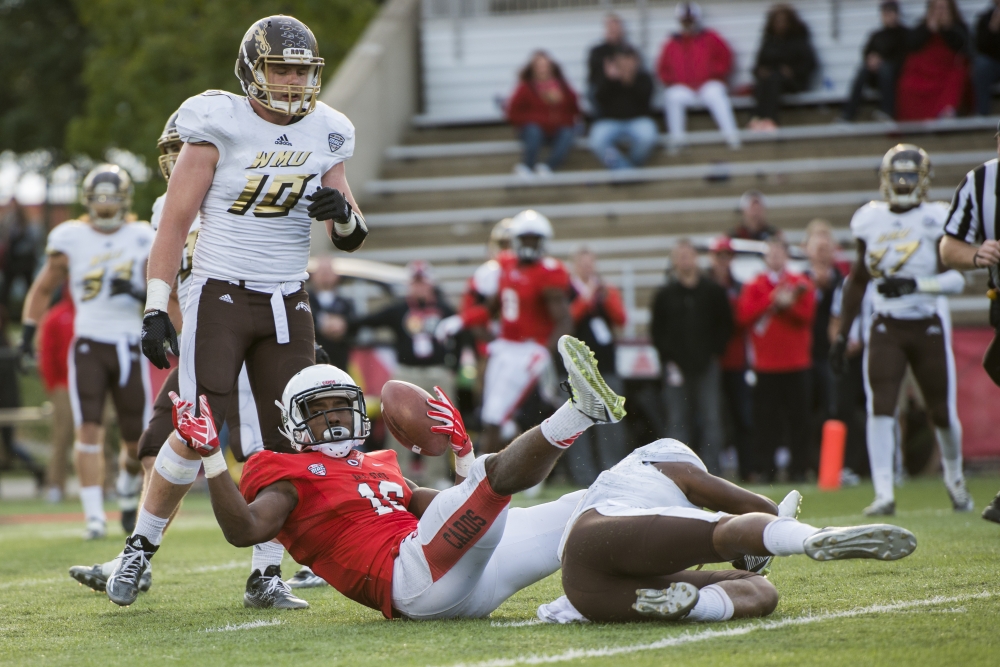 Coming off an upset road win against Central Michigan, Ball State responded by scoring 29 unanswered points to defeat Akron at home. After Akron jumped out to a 14-3 lead, the Ball State defense responded with one of its most impressive showing of the season. It rattled opposing quarterback Tommy Woodson into four second half interceptions, paving the way for Ball State to score on three rushing touchdowns and keep its hopes alive for a bowl game.

Memorable quote: “We’re showing some fight, and don’t stick a fork in us just yet,” Lembo said. 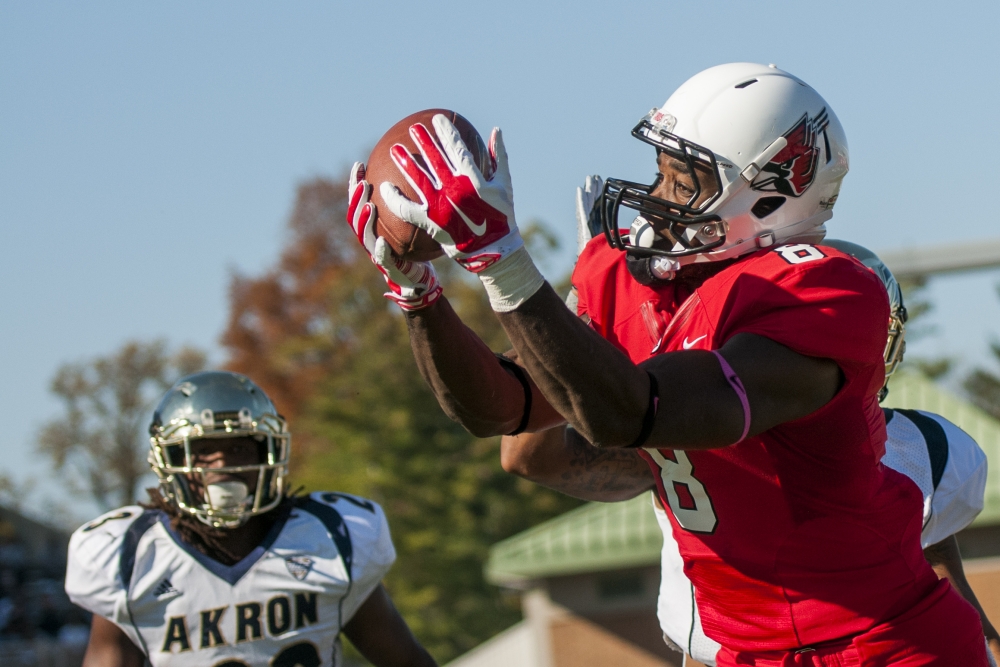 The Ball State offense was hitting a wall, as Milas was slowly regressing and starting to turn the ball over at a more frequent rate. Facing a must win game against Massachusetts to keep its bowl eligibility alive, the offense had its worst performance of the season. It scored just three points in the second half and Edwards gained a paltry 37 yards on 16 carries. The Cardinals’ offense as a whole gained just 77 rushing yards. Milas was intercepted twice, as Ball State lost the game and its chance to go to a third consecutive bowl game.

Memorable quote: “I looked out there and I saw [redshirt sophomore cornerback] Tyree Holder was the only guy in the secondary that we started the year with,” Lembo said. “That’s just where we’re at right now.” 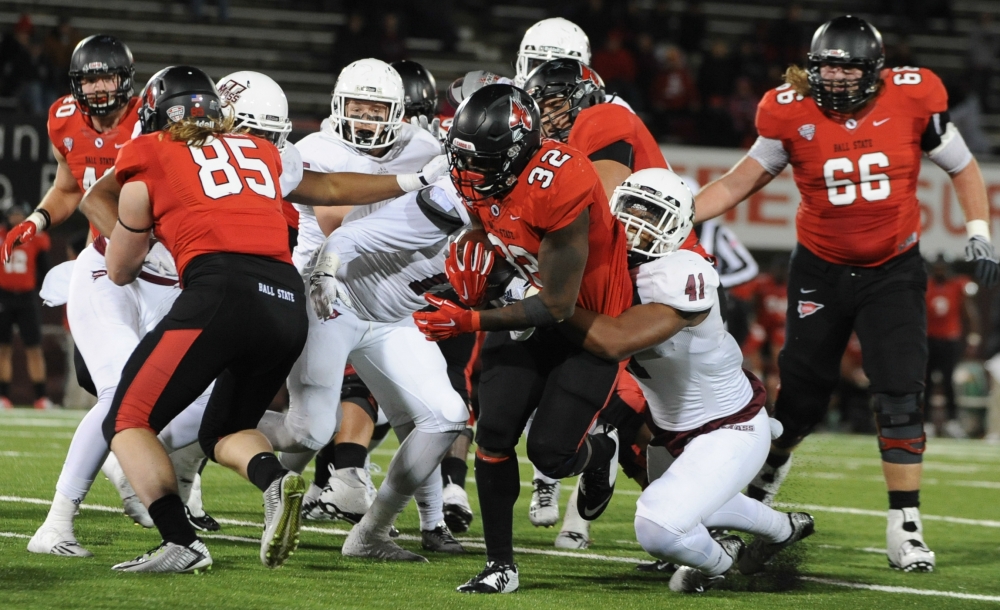 Senior running back Jahwan Edwards attempts to run the ball down the field against the University of Massachusetts on Nov. 12 at McGuirk Stadium. Ball State lost 24-10. Courtesy of James Jesson / The Massachusetts Daily Collegian

In the final game of the season, Ball State went back to Mann at quarterback after Milas suffered a first half broken wrist against Eastern Michigan the week before. Mann looked significantly more comfortable, throwing 286 yards and three touchdowns. Edwards also capped his career with an impressive performance, gaining 177 yards rushing and two touchdowns. Ball State upset the Mid-American Conference East champions, which also brought along a possible quarterback battle into the offseason.

Memorable quote: “It’s been a challenging season. I don’t think there’s any doubt about that,” Lembo said. “Great way to finish here with a big road win against one of the better teams in the conference … good to see everyone keep their poise and keep battling.” 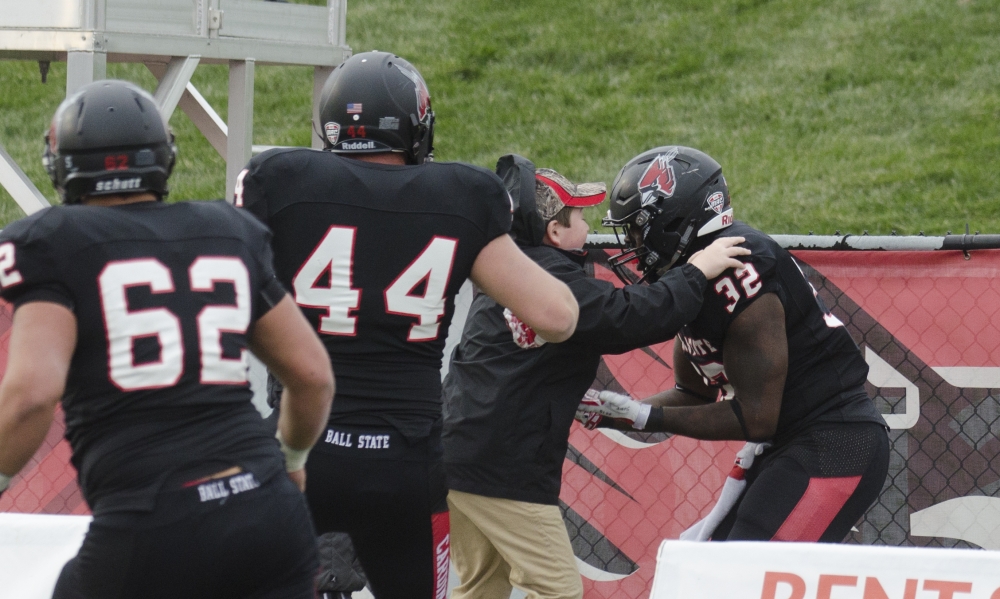 Senior running back Jahwan Edwards celebrates after getting a touchdown during the game against Eastern Michigan on Nov. 22 at Scheumann Stadium. DN PHOTO BREANNA DAUGHERTY

Cardinals fail to win a set in season opener at Louisville

Despite returning all of its players and adding four freshmen, Ball State struggled in every match against Louisville, getting swept 7-0 and failing to win a single set for the first time since April 22, 2018, in a conference matchup against Buffalo.

By Connor Granlund / 6 hours ago

13 months later and Ball State Women’s Volleyball (2-0, 2-0 MAC) looks to defend its 2019 Mid-American Conference championship. They are off to a successful start, as they defeated Akron (0-2, 0-2 MAC) in the first two matches of the season.