A year after showing he can dominate the Mid-American Conference at times, reigning MAC Freshman of the Year Zavier Turner has taken steps to become an even better player in the 2014-15 season.

With his natural height disadvantage, Turner is bound to have some of his shots blocked. The 5-foot-9-inch point guard stands shorter than most guards, let alone most centers and forwards. This becomes problematic when Turner tries to drive into the lane to get closer shots. Turner is combating this by working on a floater, a common shot for driving point guards.

“It's just something I need to become good at,” Turner said. “Getting in that lane and shooting over the big men. It's just killer for a point guard.”

Turner said he’s also working on getting more elevation in his 3-pointers as well.

Another big adjustment for Turner has been coming for months.

Late last season, Ball State head coach James Whitford expressed interest in Turner playing off the ball more this season, taking some ballhandling duties away to take a little pressure off him. With the addition of transfer guard Jeremiah Davis, that change is still in the plans. Davis is expected to be out at least eight weeks with an injury however, so Turner's transition to playing off the ball will likely occur gradually until later in the season.

One of the biggest challenges in playing more off the ball is the tendency to stand around and watch the player with the ball.

It’s important for Turner -- and other players -- to keep moving when they don’t have the ball not only to set up possible shots for themselves or teammates, but to also keep the opponent off guard.

It’s much easier for defenders to help on dribble penetrations when their player is simply standing in one spot.

“A guy drives, you relocate,” Whitford said. “You're playing off it. It helps when you get open that way. We really worked with him on that.”

Playing off the ball could also open up opportunities for him to hit 3-pointers coming off screens. Turner hit 61 3-pointers last season, the most of any freshman in Ball State history. Most of those came off the dribble.

Turner said he feels confident and excited about playing off the ball more this season, citing his experience in high school with it. 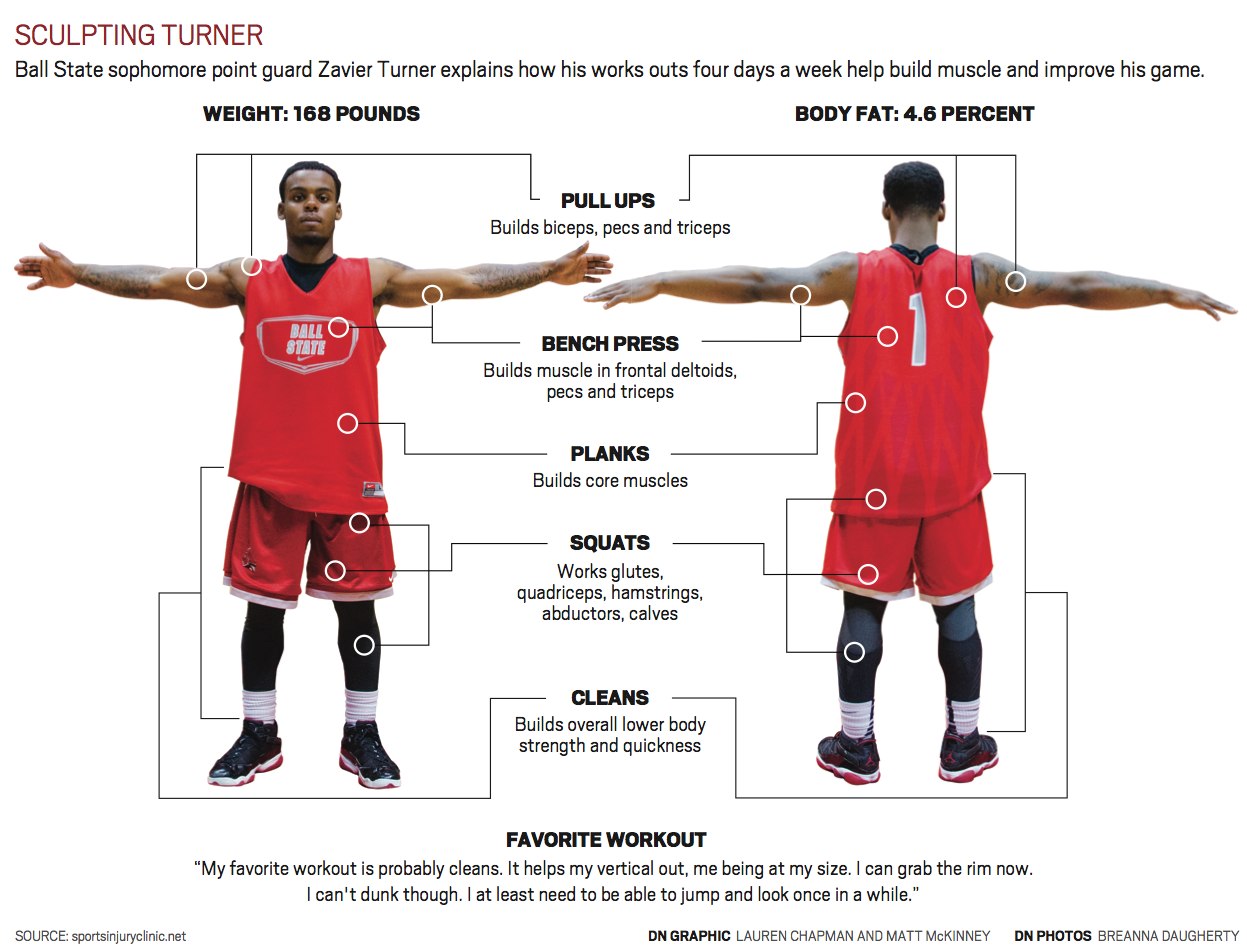 IN THE WEIGHT ROOM

One of Turner’s defining characteristics is his small stature.

Even that is changing a little bit for Turner. His weight, at times at 178 last season, is down to 168 this season, but his muscle mass has increased.

It was coordinated with Turner, Whitford and Jason Roberson, Ball State’s director of strength and conditioning.

“He'll rebound better, he'll defend more strongly,” Roberson said. “He can take on bigger guys when they switch a screen, things of that nature,”

Turner also had to change his diet some to accommodate the weight loss.

“It just comes along with just eating right,” Turner said.”I've been talking to my coach about it all the time. ... I'm trying to eat more grilled chicken and stuff like that -- more vegetables.”

Roberson said their biggest focus for Turner was making sure he didn’t lose any of the speed that helped him so much last season.

Turner’s weight was evaluated four days a week, coinciding with workouts over the offseason. His speed was checked weekly to make sure the added muscle wasn’t slowing him down.

He showed last year he has the ability to run by many defenders in the MAC, often for a layup or kicking it outside to continue the play.

“If you thought he was fast last year, he'll be even faster this year,” Roberson said.

IN THE FLOW OF THE GAME

One part of Turner’s game that Whitford said he wants to see improvements in is his awareness and learning more of the flow of the game as a point guard.

“That's much harder to do than you realize, having an awareness of the entire court and the flow of the game and what's going on,” Whitford said. “A year ago we didn't have a lot of shooters, so I think he felt the pressure to do a lot to score. I think this year he recognizes that we have more guys around him that can score. So learning to give it up at the right times where those guys can be in position to make a play.”

At times, Turner would shoot himself into a funk on offense, leading to poor possessions. He had some masterful offensive games, going 5-of-11 from the field with five assists against Marquette, but he would have some games where he’d go 2-for-10 with seven turnovers, like against Western Michigan last season.

“He's getting better with it each day,” Whitford said. “He's got more scoring options around him. So putting those guys in position to be successful – that’s the greatest step he has to take as a player. It's what our team really needs him to do.”