Snead is one of just two players in Ball State history with two 1,000-yard seasons

Willie Snead’s stock may never be this high again.

After back-to-back 1,000 yard seasons, Snead announced on Tuesday he is forgoing his senior year to enter the 2014 NFL Draft. Snead’s father is a football coach, and despite the importance he places on education, supports Snead in pursuing the draft.

Through his father’s connections with players and scouts at the NFL level, Snead is confident that now is his time.

“If they think Willie Snead is good enough to play at the next level right now, then that’s what I’m going to do,” Snead said. “I’ve done a lot for Ball State, and I feel like its time to move on to the next phase of my life.”

Willie Snead’s father, Willie Snead III, also had his chance at an NFL career. He was drafted by the New York Jets in the 12th round of the 1989 NFL Draft.

In three seasons playing with senior quarterback Keith Wenning, Snead has gained 223 receptions for 2,991 yards and 26 touchdowns. More importantly, he’s built a bond with Wenning that he knows can’t be replaced in a single season.

Now, he’s taking the next step with his quarterback.

“I’ve been playing with him for three years,” Snead said. “That’s probably the best feeling – to be able to go out with a quarterback that I’ve built such a bond with and been such a good combination with.”

Fears that Wenning’s departure will result in a drop in his own numbers pushed Snead towards this decision. Snead has been deliberating for nearly a month.

On one side is a chance at the big leagues and a big-time paycheck. On the other is an education and Ball State teammates he’s played with in back-to-back bowl games.


A graphic look at Snead’s time at Ball State. 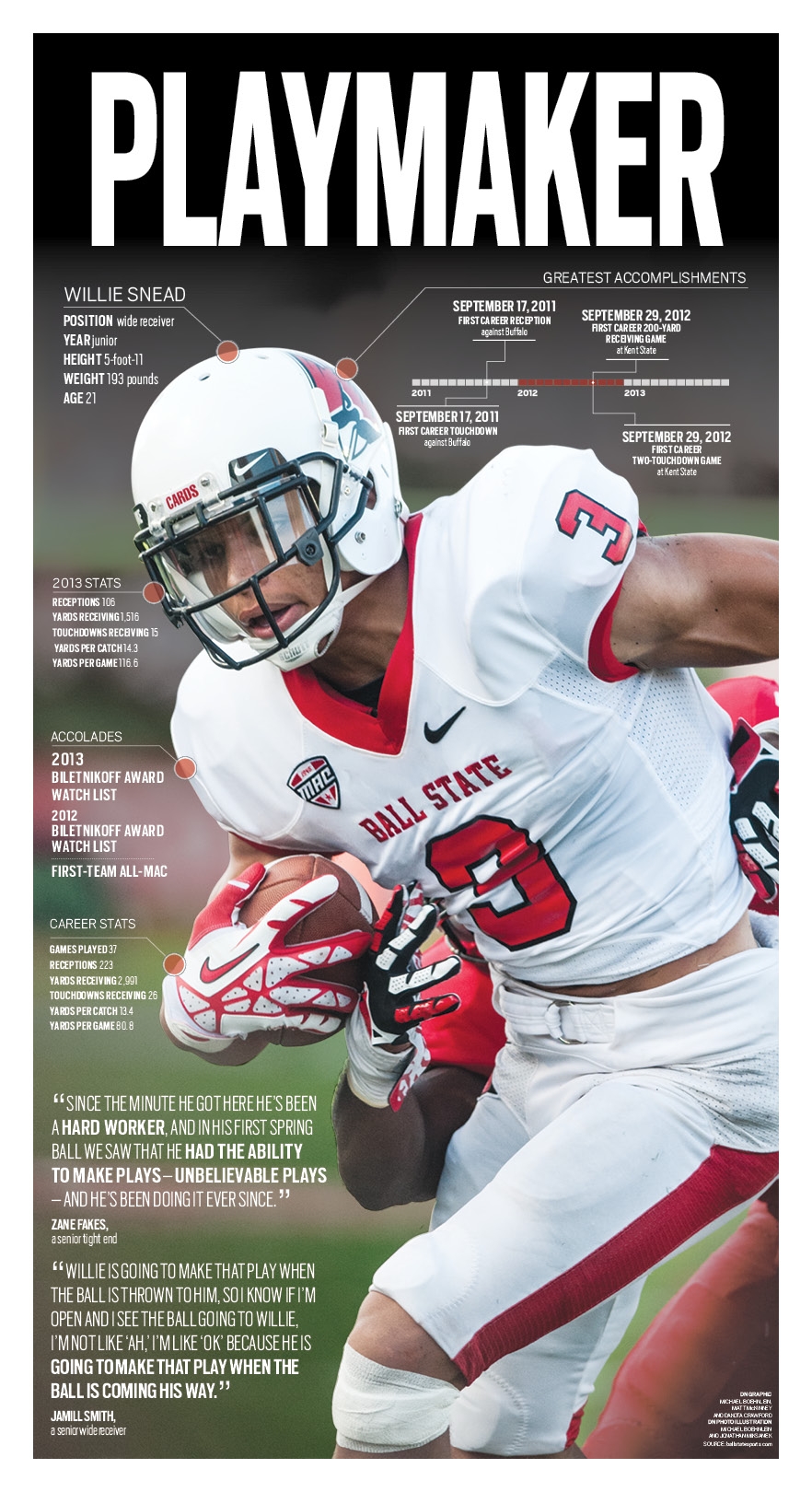 Snead values his education, but he’s not giving up on a degree to pursue the NFL – just prolonging it.

“I’ve talked to my agent, and I don’t want to take this step if I can’t finish my education,” Snead said. “I won’t be playing football forever, and I know I’ll need that piece of paper later.”

It’s all about timing. Snead said if he’s fortunate enough to make a team in his first year, then he’ll work through an NFL education program.

Snead said his family advised that education remain a priority – and it will – but he could soon be able to support them financially.

“If I make a big check, it’s a blessing,” Snead said. “I’ve worked hard for this, I’ve played a lot of football for this opportunity right here, and I don’t want it to pass me up.”