But as life goes, the Ball State junior running back had to make an unexpected visit home. Edwards received news following Ball State’s 42-24 win over Akron on Oct. 26 that his grandmother died. He was able to return home for the funeral the next weekend, using funds from Ball State’s NCAA special assistance fund for student-athletes.

“[Ball State] will help you out when they can, if it’s an emergency,” Edwards said.

The fund helps student-athletes, who are on Pell Grants, receive financial assistance in emergency situations among other needs. Even with the fund, Division I institutions are searching for more ways to increase the student-athlete’s experience while maintaining the amateurism ideology. 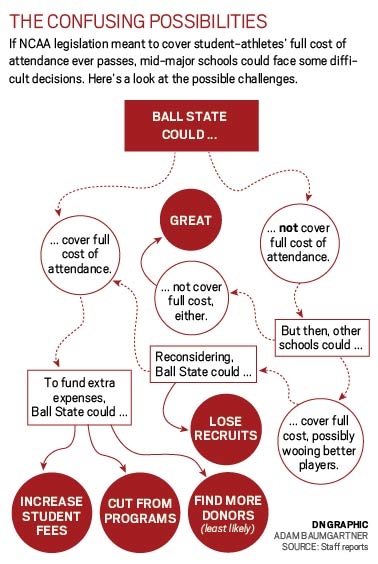 A model that has gained traction among Division I institutions isn’t a pay-for-play model, it’s covering the full cost of attendance.

The model differs from the fund because it wouldn’t be limited to student-athletes using Pell Grants.

“It would definitely help,” Edwards said. “Just for the kids that are on scholarship and can’t get money [from the opportunity fund]. I just feel for the guys that can’t get [the Free Application for Federal Student Aid], I feel like those guys should be more substantial to things like that.”

The model is costly, but schools at both the Bowl Championship Series and mid-major level are in favor of the idea.

It’s a matter of balancing the budget for it.

What the full scholarship doesn’t cover is what’s called the full cost of attendance. Ball State lists its full cost anywhere between an extra $2,800 to $3,200 for personal expenses and transportation. Those are left at the responsibility of the student-athletes, who may not have such money.

Student-athletes are allowed to apply and receive Pell Grants like any student on campus. But a violation occurs if a student-athlete receives monetary benefits just for being an athlete.

Bill Scholl, Ball State athletic director, agrees if the full scholarship is inadequate, schools need to look at ways to make it appropriate.

“The full cost of attendance is certainly an interesting way to maybe go about that,” Scholl said. “In general, I’m for that. Whether or not at a [Mid-American Conference] level we can do that, I don’t know if we can do that.”

In 2011, a proposal was put through the NCAA governance structure to allow schools to cover the full cost of attendance for its student-athletes. The proposal was overridden in part because schools didn’t like how it was moving at an unorthodox rate.

A maximum dollar amount of $2,000 was proposed. If it had passed, Ball State would have needed to make changes to its athletic budget if it had adopted the ruling.

All schools in the Football Bowl Subdivision are allotted 85 scholarships for football. To cover all 85 scholarships at $2,000 apiece, Ball State would need to budget for $170,000.

Ball State has roughly $20 million for its athletic budget, Scholl said. So, 1.4 percent of the budget would go toward covering the full cost of attendance. To BCS conference schools, like Michigan’s $137 million athletic budget, covering the full cost of attendance wouldn’t put the stress on an athletic department like Ball State or other mid-major programs.

“Whether that’s reallocation of resources, that could mean cutting programs,” Scholl said. “You could take grants-in-aid away from some programs and reallocate it somewhere else. You’ve either got to reallocate resources or generate more resources.”

Scholl said generating more resources at the mid-major level is difficult because the BCS conferences profit from media contracts like the Big Ten Network.

Athletic departments in the MAC and the Sun Belt depend on student fees to help with revenue. At Ball State, students pay $316.10 per semester for an intercollegiate athletics fee, which helps the athletics department run its operations.

As part of the intercollegiate athletics fee, students are able to attend home games for free. The price of the fee could increase if Ball State decides to cover the full cost for student-athletes.

“The only way I could see that we could do it is if we went ahead and put an additional student fee on to each individual student,” Pat Quinn, Ball State associate athletic director, said.

Ball State’s increase would be $288,000 assuming the proposal had passed. To put this in perspective, Ball State’s total on-campus enrollment for 2012-13 was 17,851 students. So, if this proposal had taken affect last year, students would have paid an extra $16.13 per year at most.

The NCAA allots 98 scholarships between the men’s headcount sports and 47 among the women’s sports. The disparity wouldn’t fulfill Title IX gender equality obligations.

Quinn suggested a solution to those obligations is to provide for every scholarship student-athlete, full or partial.

“We’ve got women’s swimmers and women’s track athletes that are working just as hard as any full scholarship athlete,” Quinn said. “They’re only receiving a partial. They’re doing it maybe for the scholarship they’re getting, but they’re also doing it for the love of the sport and the competition.”

Ball State isn’t alone in dealing with this issue. Other MAC institutions and programs from the Conference USA and the Sun Belt have similar athletic budgets and share the same opinions.

MAC Commissioner Jon Steinbrecher said the discussion of covering the full cost of attendance is legitimate, but stressed the difficulty in setting a maximum dollar amount.

“[For example], if at Institution A, the amount is an additional $2,500, but at Institution B, that number is $3,500,” Steinbrecher said. “Do you really think you’re going to get an agreement among schools that one school can give $1,000 more than another school?”

The MAC could better handle the idea when a dollar amount has been settled.

“I don’t know how you can do that, quite frankly,” Steinbrecher said. “It’s a number that’s based on the number of student-athletes you have and what sports you sponsor.”

At Western Kentucky, a Sun Belt school, the athletic budget is roughly $21 million, said Todd Stewart, the university’s athletic director. East Carolina of the Conference USA has an athletic budget of about $33 million for the 2013-14 academic year, said its athletic director, Jeff Compher. Still, the budgets aren’t close to those in the BCS conferences, which creates discussions on how to budget the costs.

East Carolina does know it won’t make radical decisions unless there are no other options.

“Program cuts would be a last resort,” Compher said. “We wouldn’t look to take money out of our own hide. We would have to look at our season ticket buyers and fundraisers, first, and say if this is the level you expect us to compete at, there’s a cost associated with that.”

Stewart, whose athletics budget more closely resembles Ball State’s, favors the idea, but only if it’s being used for its purpose.

“It would be great to help with [the full cost of attendance],” Stewart said. “Not if it’s going toward jewelry or big screen TVs.”

Noreen Morris, chair of the NCAA Division I Leadership Council and commissioner of the Northeast Conference said covering the full cost of attendance becomes a recruiting challenge for competing schools.

In 2014, East Carolina will move to the American Athletic Conference, which has a higher competitive level than its current conference. The move makes Compher aware that his school’s programs will have to compete at a higher level.

“Whatever it takes to play at the highest level, that’s what we want to do,” Compher said. “We would have to figure a way to fund the full cost of attendance for student-athletes if that’s what it came to.”

Mid-major programs could feel pressured to cover full cost of attendance to maintain a level playing field with schools from the power conferences. If mid-major schools decide not to, seeing a team like Wichita State make the Final Four could be over.

But Morris said the concept of a level playing field between the BCS and mid-major conferences is already gone.

“The NCAA has come to that realization,” she said. “There’s no such thing as a level playing field. The bigger schools have nice stadiums, nicer locker rooms and nicer charters.”

The NCAA Convention in January could have a major impact on how soon a permissive ruling will be made. The focus of the convention is on legislative reform, but discussions on full cost of attendance are possible.

Scholl said once the NCAA reform happens, the full cost of attendance will become the focal point.

“I think everyone feels a sense of urgency to try and get some of these issues ironed out,” he said. “I don’t know what the end results will be. But I think you’ll see some resolutions to these issues in the next six to 12 months.” 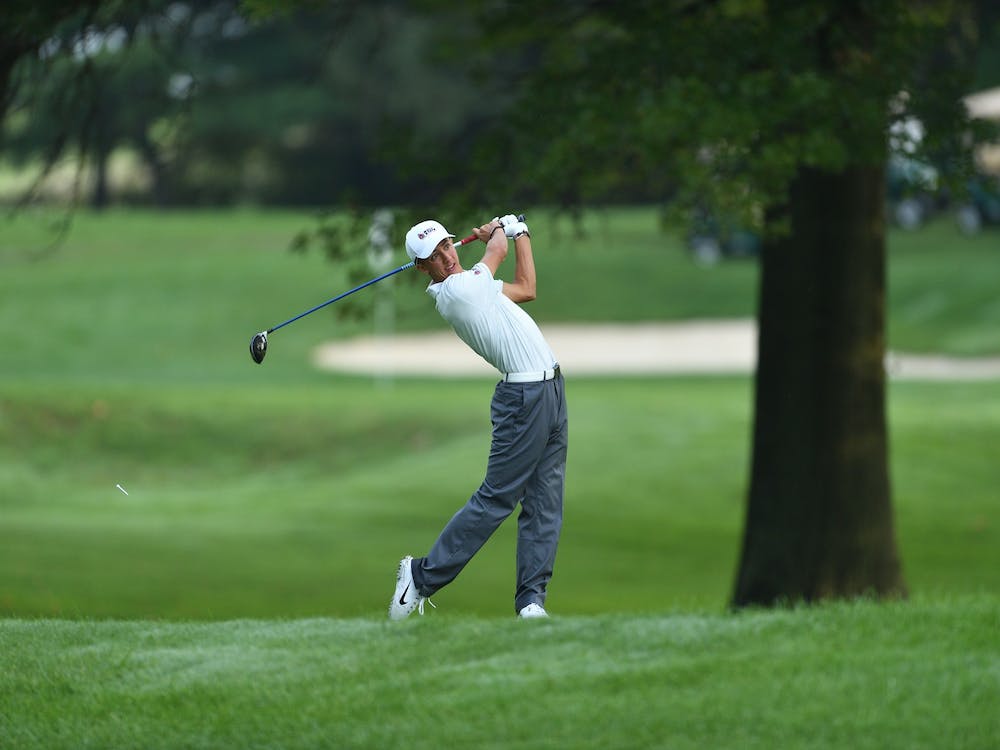