The Board of Trustees is hosting a seventh open forum to provide Ball State students, faculty, alumni and members of the Muncie community a chance to say what qualities they think the next university president should have and what the next president should focus on. DN FILE PHOTO BREANNA DAUGHERTY 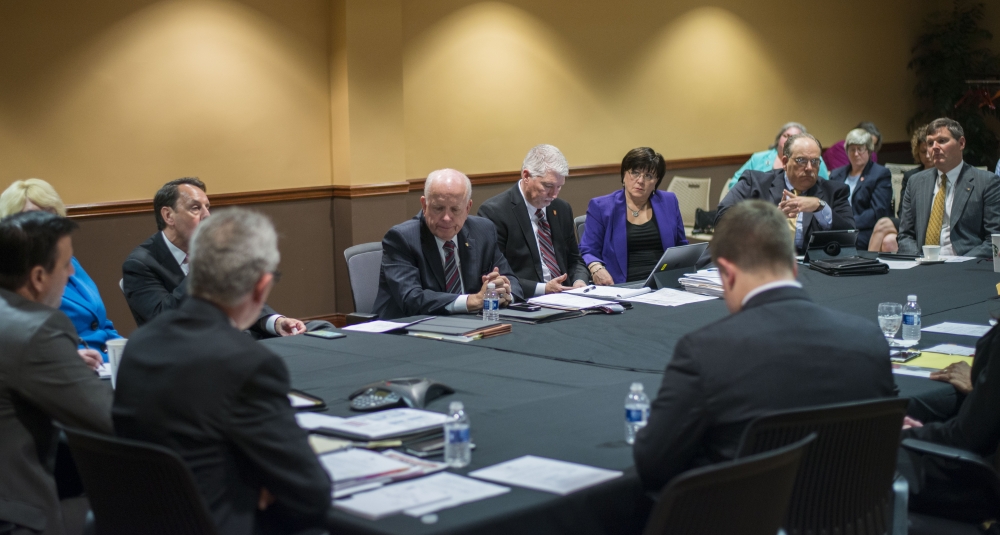 The Board of Trustees is hosting a seventh open forum to provide Ball State students, faculty, alumni and members of the Muncie community a chance to say what qualities they think the next university president should have and what the next president should focus on. DN FILE PHOTO BREANNA DAUGHERTY

For those who are unable to attend the forum, comments and thoughts can be sent to bsutrustees@bsu.edu or BallStatePresident@wittkieffer.com.

The Board of Trustees is hosting a seventh open forum to provide Ball State students, faculty, alumni and members of the Muncie community a chance to say what qualities they think the next university president should have and what the next president should focus on.

The forum will take place at 7 p.m. May 23 in the Ball State Alumni Center Assembly Hall, located at 2800 W. Bethel Ave.

Trustee and head of the presidential search committee Matt Momper said 10 pages of comments were generated from the first six forums. The committee then regrouped and took into consideration a comment from a student who was unable to attend any of the forums due to class scheduling. Momper said the turnout from faculty and staff was phenomenal, and the seventh forum is taking place with the hopes that on- and off-campus students will attend.

“We did get a couple comments from other people asking, ‘Will there be another forum?’ and we thought, 'You know what, we’ve had a couple comments, so why not [have another one]? We have time and let’s leave no stone unturned,'” Momper said. “We’re still in that point where we’re creating our position profile.”

The search firm hired to work with the presidential search committee, Witt/Kieffer, will create the position profile. Momper said this profile is designed to help the new president gain an understanding of what they’re going to be leading and working with as far as the strengths and weaknesses of Ball State.

“It also talks about where Ball State is, where it’s been, where it’s going, what’s the makeup of the climate that we’re in right now? Whether it be the state government, the student population, just all the things that make up a university, … it’s more than just the presidency, it’s Ball State,” Momper said. “The strengths, the weaknesses, the areas that we excel at, the other areas of opportunity and the other areas that need worked on.”

Fellow trustee and search committee member Renae Conley agreed, saying the comments so far have been extremely helpful to the committee.

“That’s what we’re here for, is to hear from the people that are led by a president and that have the best insight as to what does that person need to possess,” Conley said. “Whether it’s a university or a corporation or a club that you belong to, the leadership sets the tone for the culture and how it conducts itself, and really making sure we get the right leader that continues to move us forward is so key.”

The search committee will receive a draft of the position profile to edit, and the search consultant will start looking for candidates based on their adjustments.

Representatives from Witt/Kieffer have been on campus and have met the Cabinet, deans of colleges and Mayor Dennis Tyler to get their input.

“I think the forums are critical. Ball State University is like a Fortune 500 company, it’s that big. … We need input from everybody. … You need a well-rounded president with a lot of skillsets combined to lead this university,” Momper said.

John Thornburgh, a senior partner with Witt/Kieffer, previously said this process could be completed as soon as October.