Ball State off to 2-0 start in MAC play 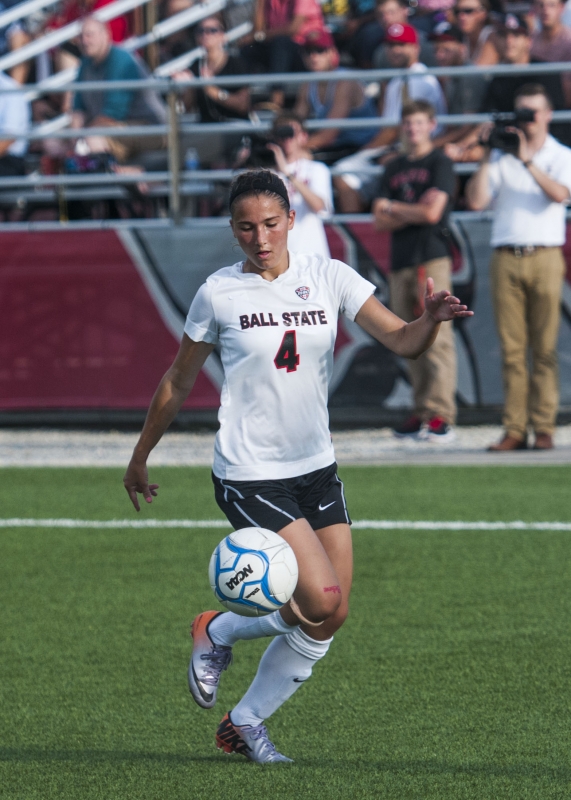 Sophomore midfielder Gabby Veldman follows the ball during the game against IPFW on Aug. 22 at the Briner Sports Complex. DN PHOTO JONATHAN MIKSANEK

Ball State won against Eastern Michigan on Sept. 25, and defeated Bowling Green on Sept. 27 for a 2-0 start in MAC play.

The Cardinals were tied for much of the match against Eastern Michigan, but won it in the second half.

“Eastern Michigan is [a] well-disciplined team,” head coach Craig Roberts said. “There is never an easy game in the MAC, but it is a good win for our team as we enter conference play.”

The match looked as if it would be high-scoring when Eastern Michigan's starting goalkeeper left the match.

Megan McCabe collided head-on with Gabby Veldman as she was threatening to score in the first five minutes. No foul was called, and McCabe left the match and never returned.

Ball State's Chelsy Swackhamer got the scoring started with a goal in the 37th minute to take a 1-0 lead. She beat the keeper from the right side of the goal, as the ball was just out of reach.

Swackhamer has now scored in three straight matches and is becoming a vital part of the Cardinals' offensive attack.

“I’ve just got into my comfort zone,” Swackhamer said. “Everything is coming together for me and the team right now.”

After Eastern Michigan evened the score in the first half, Leah Mattingly scored in the 75th minute to take a 2-1 lead that would stand for the rest of the match.

Mattingly broke the tie with a header from Lauren Hall’s corner kick. It was Mattingly’s first goal this season after leading the team last year in goals scored.

Veldman had a goal called back from an offsides call. But the Ball State defense held up until Mattingly's goal to win it.

“We wanted to bring the ball to them offensively through our spacing,” Roberts said. “They closed down on us quickly but took advantage of our opportunities to score.”

The defense stood up in the win over Bowling Green also, and it shut out the Falcons. Ball State outshot Bowling Green 24-7 in the match.

“Defense starts with the entire team, but you obviously have to have a strong goalkeeper and a strong back line,” Roberts said in a statement. “We challenged our team today because, while we have been very good defensively, we have allowed teams to sneak a goal here or there on restarts. We really wanted to lock down."

Lorina White's goal proved to be the difference, as it was the only score of the match in the 63rd minute.

Ball State has made a habit of scoring late in matches this season, as it has now played four matches decided by one goal.

The Cardinals are now 6-2-2 on the season. Ball State is one of five teams in the MAC that has yet to lose a league match.